The MV Agusta Turismo Veloce is an all-day touring-capable sportbike that’s based on the same fundamental engine that powers other 800-class sportbikes in the MV Agusta range, like the MV Agusta Superveloce 800. It’s a 798cc three-cylinder engine with four valves per cylinder and dual overhead cams. It’s tuned much more mildly, and makes peak power of 110 hp (81 kW) at 10150 rpm — a sweet spot for a middleweight bike. Peak torque of 80 Nm (59 ft-lb) comes on at a much more middleweight-biased 7100 rpm.

The Turismo Veloce sacrifices a little style for the comfort, but it still looks great with its triple exhaust, exposed trellis frame, and the single-sided swingarm.

While the Turismo Veloce has had some minor updates over the years, the fundamental engine and maintenance schedule have stayed the same.

What you need to service the MV Agusta Turismo Veloce

If you want to do a basic service on your MV Agusta Turismo Veloce, you’ll need the following items. MG Avusta recommends Motul lubricants (since the partnership agreement in 2016)

See below for a reference screenshot.

Older versions of the manual (prior to the Motul partnership) recommend ENI fluids of the same spec.

Below is the MV Agusta Turismo Veloce’s maintenance schedule.

Service intervals for the MV Agusta liquid cooled triples is quite wide:

But MV Agusta puts a lot more detail into their maintenance schedules. They have lots of things other manufacturers don’t mention, like replacing the timing chain and tensioner, replacing the clutch spring drive, and performing regular compression tests (along with valve service, while you have the tank off anyway). All this means that your required service by a dealer is likely to be more expensive.

MV Agusta lumps it all together into one huge table. But since this is confusing, we’ve broken it apart into separate sections:

To maintain the chain, at a minimum, check / adjust / lubricate the chain at the following intervals.

Do the following maintenance daily (or regularly). It’s mostly checks. Also do these items as part of your scheduled maintenance.

Aside from checking fluid levels and tires, many of these checks are things you’d observe as you gently ride away (e.g. do the brakes work as you hold it steady before riding away? Does the throttle work?)

Below is the bulk of the maintenance schedule.

Remember to regularly service your chain and include the daily maintenance checks in this list.

Your MV Agusta bike comes with a warranty booklet that comes with recommended “service coupons”, starting with A for the break-in service, and going up through the alphabet. The dealer fills in the service coupons and the customer keeps them.

Tires and tire pressures for the MV Agusta Turismo Veloce

These are the recommended tire sizes and pressures.

About the MV Agusta Turismo Veloce

The Turismo Veloce is not the kind of bike one used to associate with MV Agusta, a brand which is all about “motorcycle art”.

But even the iconic Italian brand couldn’t resist the temptation to grab a slice of the middleweight sport adventure tourer market that has seen so many entrants in the 2010s. The Turismo Veloce could be best likened to the Yamaha Tracer 9 — with the heart of a much sportier bike, but in a chassis that goes the distance

The MV Agusta Turismo Veloce is based on the same fundamental block (i.e. pistons of the same bore and stroke) as is found in much higher power sports bikes in the Italian brand’s lineup. It’s a 798cc liquid-cooled triple with dual overhead cams and four valves per cylinder.

But in the Turismo Veloce it’s tuned for midrange torque rather than top-end power.

So, on paper, the Turismo Veloce makes significantly less power, but it’s due to the way the torque curve is oriented towards the bottom end. Like the Brutale 800, torque comes on way lower — at the cost of a lower redline.

Coupled with the different gearing, and the TV is obviously designed to be much better at low speeds and everyday riding.

Front braking is via huge 320mm double floating discs, with Brembo radial 4-piston calipers gripping them — this is standard fare on sportbikes (though not on superbikes).

The base model comes with a fully adjustable Marzocchi fork and Sachs rear shock.

And on the Lusso and RC versions, you get semi-active Sachs suspension which adapts for cruising comfort or high performance at speed. It’s the same “Skyhook” variety you may have heard of in some other brands’ adventure tourers.

So what makes the MV Agusta Turismo Veloce unique among the middleweight adventure sport crowd? The engine and the style! Yes, Yamaha has the triple; but only MV Agusta has that gorgeous rear wheel and the exposed trellis frame. The trick transparent clutch cover is just a bonus.

The MV Agusta Turismo Veloce is so good at what it does that the Italian police even commissioned a few as their official units.

The above maintenance schedule comes from the owner’s manual for the MV Agusta Turismo Veloce, also consulting other MV Agusta manuals for triple cylinder motors. You can see some screenshots below.

You can get more information from your local MV Agusta service centre.

Maintenance schedule and service interval for the Triumph Thruxton R

Maintenance schedule and service intervals for the Honda CTX700N.

Maintenance schedule and service intervals for the Honda XR650L. 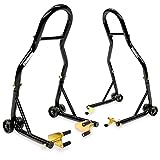